A short story about a Squirrel

The high initial Siamlambretta’s sales demand, at the end of 1954, made the very first units sold by SIAM to be nothing less than Lambrettas D mk1 with the badges changed by the ones of the national new brand. That’s why exists Siamlambrettas with the Teleflex gear change system, subsequently replaced by the national twin-cable gear selector modification.

This very first scooters had, in the “Standard” models (D), “Siamlambretta” decals on each sides of the fuel tank and a badge in the front handle with the brand name. In the “De Lujo” models (LD), they had a “Siamlambretta” badge on each side panel and a little badge inside the bevel of the left side of the front legshield, same as Lambretta 125 LD. 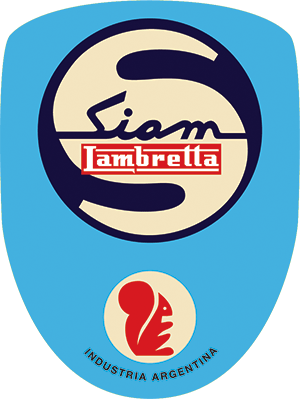 But something very characteristic of the Siamlambrettas LD, since its origins, is that little badge on the front legshield shows something that Lambretta never had: a little red squirrel, that even today is matter of debate in some specific forums and whom we come to bring some “light shine” with this article. It’s worth to mention, on the other hand, that this squirrel is also present on the front badge of the Siambrettas/Siamlambrettas models 125 LD, 150 LD, 125 FD and 150 FD.

A short after the firsts Siamlambrettas were released to sale, on May 19th 1955 the Club Siambretta was funded. It was an association -sponsored by SIAM- of owners and fans of Siambretta, that had its highest popularity between 1955 and 1965, which aim was to promote meetings, technical speeches and all kind of social events related with the popular national scooter .

Checking the archives, we found that this little Squirrel of the front badge is present in several old photos of the meetings in the “Serviclub Siambretta”, the central headquarters of the Club Siambretta in Buenos Aires City. Digging even more in the information, we arrive to know that the members of the club were named after “The Squirrels”.

The Squirrel can be shown, also, in the pins of the Club Siambretta’s members and, even more, in the awards given in the Club’s competitions, being the “Golden Squirrel Award” the most valued one.

For all this evidence, we believe that this Squirrel acted as a kind of ‘Isotype’ -created by SIAM- that tried to give identity to the brand and the culture surrounding the Siambretta. Something that’s common nowadays (Pepsi, Apple -among others brands- has one), but implemented as vanguardist as national for that age.

Finally, the meaning of the choosing of the animal was not trivial. Squirrels are very fast and elusive, as same as as the Siambrettas in the heavy transit of the Buenos Aires of the 50´s.